The post-Corona office: what has changed? 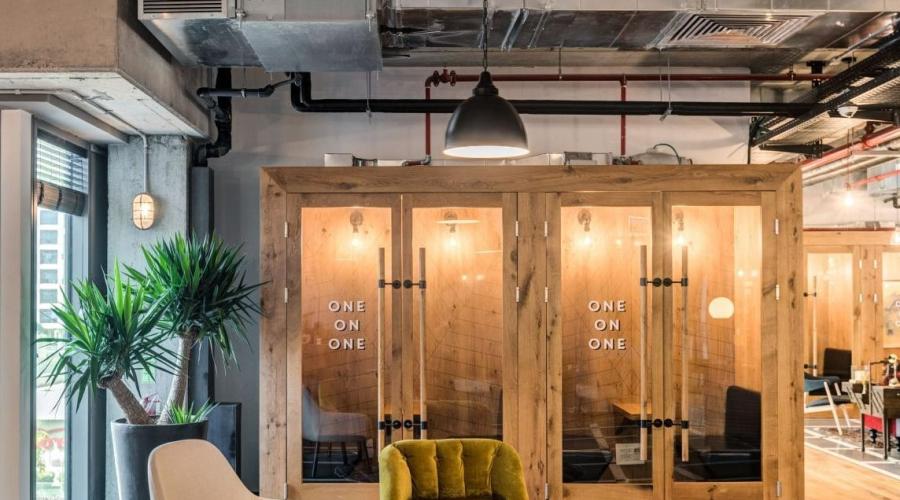 The beginning of 2020 is seen as the start of the global corona crisis. To prevent the contamination from getting out of hand, the Dutch government intervened with various measures to contain the COVID-19 outbreak. Working from home, compulsory wearing of a mouth mask, and keeping a 1.5-metre distance are some examples of government measures. Since the beginning of January 2021, the Netherlands has also started vaccinating. Vaccination rates are now increasing rapidly and therefore the government can slowly start relaxing them again.

The end of the 1.5-metre society not only has an impact on our (social) lives but also on the way we work. People were urgently advised to work at home. In addition, the people who were allowed to come to the office had to adjust to the COVID-19 guidelines that were set. Casper Klap, Chief of Tribes, landlord of flexible office spaces and workplaces, states: "Within Tribes we worked with so-called blue zones. These are zones in which people can work safely and with an appropriate distance”. Also, during the pandemic, the term 'blue zone' is used worldwide for certain places where people live longer and healthier lives. He also states: “We had plexiglas between the workplaces before the end of the 1.5-metre rule, but I have since removed this so that it has become more of an office garden again."

Maintaining a safe workplace remains important, of course, but we no longer have to maintain a mandatory distance in the office. "We saw many office space providers, for example, indicate walking routes with stickers or place plexiglas between the workplaces. We didn't actually have that, so for us there wasn't that much change in our office locations," says Freek Oversloot, Property Manager at Workspot. They offer flexible work environments in and around Rotterdam. "Some of the locations we offer are already one-way as standard because the corridor is only 1.40 meters wide. Furthermore, it is mainly people's own responsibility to keep their distance", says Freek.

Thom van Wijk, CEO of ScaleHub Offices, also sees little change in their office locations after the end of the 1.5-metre distance. "Before the corona crisis started, we already had our offices more spacious, that's in the concept of ScaleHub Offices. We are surrendering a number of square meters but that gives a real sense of quality. Our locations are actually coronaproof in themselves, but of course we didn't know that beforehand!"

More people in the same space

No 1.5-metre distance means that more people can now be in an enclosed space. "That means more traffic in the office buildings. It's going to get busier anyway and I don't notice that people mind," says Menno Hollander. Menno is Sales Manager of IWG in the Utrecht area. IWG is one of the largest providers of (flexible) office space with locations to rent all over the world, known among other things for their brands Regus, Spaces, The Office Operators and Easy Offices. "People are going to meet each other more often. Sitting together face-to-face again," says Menno.

Of course, it depends on the tenant whether they feel comfortable enough to sit closer together again. "If someone asks how many people can fit in this space, we give them the choice between the guidelines with the 1.5-metre rule and the comfortable working distance post-corona. So, people still have a choice, but I also notice that most people really let go of the 1.5-metre spacing now," says Casper.

We had to adapt (temporarily), but that does not make for structural changes in the office layout. "We are not rearranging our offices, workplaces or general areas. However, the capacity restrictions have been removed. First, you could only have three people in the meeting room, but now you can have five again," says Thom. Menno also sees no lasting changes in layout. "On the one hand, we have removed chairs, and on the other hand, we have worked with signings. Will it be rearranged? No, it's been put back the way it was."

At Workspot, they converted some meeting rooms into office spaces. The meeting rooms could no longer be rented out due to corona guidelines. "Even now that the 1.5-metre rule has been lifted, we are leaving it that way. We are now going to open a large conference centre at one of our locations, so these smaller meeting rooms will no longer be needed. We will have a much larger and more luxurious alternative," says Freek.

He notes that because of working from home, people now want to put more effort into making the (physical) meeting moments more special. At the office locations, where there are standard meeting rooms, little will change. They will remain as they were before.

The 1.5-metre rule has been rejected as of 25 September, which means that keeping a distance is no longer urgently recommended in offices. However, from 25 September onwards you will have to show your corona access card in places where it is now busier without the 1.5-metre distance. This includes all catering establishments (except take-away locations), events, and displays of art and culture.

Within offices, a corona access card is not (yet) necessary and if it is up to the landlords of office space, it will certainly not be introduced. "No, that's not going to happen. We can hardly put someone at the door with a scanner. If you're sick, you shouldn't come to the office," says Thom. This is also how Menno, Casper, and Freek view the corona passport. "We have been open throughout the corona crisis and we have said that this is a safe workplace. Therefore, we will absolutely not check if someone has recently recovered from or been vaccinated against COVID-19. We assume that people take that responsibility themselves and they have to take it."

More and more companies are realising, due to the corona crisis, that they do not want to be tied down to a certain number of square metres for years on end. Many people work from home several days a week, which means that companies no longer need a colossus of square metres of office space. "The change we are seeing is that many more companies, who used to rent conventionally, are coming to us. When they take a closer look at the question - what are our office needs - more and more companies are of the opinion that they can sit in the most beautiful office of ten thousand square metres, but then they can no longer manoeuvre. If you cooperate with a party like IWG, you choose for flexibility and you can continuously manoeuvre," says Menno. Casper also sees this development in their business.

Flexibility ensures that you can easily scale up or down when the office needs change. "The demand for flexible leases is increasing. Signing a standard contract for two years is no longer an option. Often a half-year with three months' notice, for example. Flex-working is also becoming more popular," says Freek. "We see more and more people who used to come for a 10-person office and now come for a 6-person office. And there are different people in the office on Mondays than on Tuesdays."

All note that flexibility in offices will become a more important aspect in the future. Not only flexibility in rental terms and square metres, but also flexibility in the way you work. One term that often comes up is hybrid working. People then work partly at home and partly in the office. Hybrid working offers many opportunities and is also experienced by the majority of people as very positive. As Menno pointed out, tens of thousands of metres of office space are no longer needed, which means that the demand for flexible office solutions will only increase.

"The office seemed dead for a while, but it is more alive than ever," says Thom from Scalehub Offices. People still have an interest in office space, only the needs have now shifted somewhat. After all, an office is more than just a workplace. It's also a place to meet, to work together, to relax or just to concentrate, when that's not possible at home. We will have to respond to this and slowly but surely, offices will be furnished in a different way.